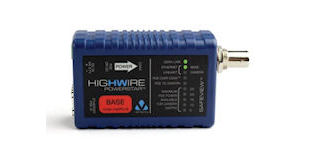 SKU: VHW-HWPS-B
Veracity Powerstar Ethernet/PoE Over Coax BASE Unit - (VHW-HWPS-B)
Specifications Sheet
Integrated PoE
PoE (802.3af/at)
Ethernet Speed
100Mbps
Connectors
BNC
Description
Description
Specifications
Resources
Package Contents
Veracity HIGHWIRE PowerStar lets you install IP cameras easily, quickly, and reliably, without the disruption and expense of installing new cable. Support for your camera is assured, thanks to HIGHWIRE's unique full-rate Ethernet over Coax technology, which has been tested and trusted by thousands of IP installers worldwide over the past five years. And now with POE over Coax, you can deliver up to 25 watts of POE power to the camera as well, eliminating the complexity of installing local power supplies. Delivering full network connectivity and standardised, centrally-sourced power without re-cabling, HIGHWIRE removes many of the barriers to upgrading systems from analogue to digital. With the familiarity of coaxial cable and the reliability and cost advantages of POE, HIGHWIRE PowerStar is an effective choice for the installation of new IP video systems where cable runs may be very long or inaccessible. Connecting HIGHWIRE PowerStar units back-to-back allows the network signal to be repeated without local power, enabling extension of Ethernet up to 4km (2.5 miles). The ability to convert coax into a network connection without requiring power has many advantages in upgrading CATV or satellite systems in hotels or other buildings, among other applications. HIGHWIRE technology has been successfully used with 50 ohm cable and many other non-video types.
Features
Related Products 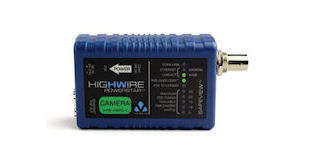